SAN FRANCISCO (CBS SF) — Rachib Dahnoun’s drive from Bodega Bay to the San Francisco International Airport was sidetracked early Thursday by an intense rainstorm that swept through the San Francisco Bay Area, triggering flood advisory across the region and possibly keeping him from catching his flight.

Dahnoun and his Uber driver were forced to abandon their vehicle when it stalled in several inches of water pooled on Highway 1 near Valley Ford in West Sonoma County.

“We were just headed to the airport, going to see my in-laws, and the road here was flooded,” he said. “It was super dark and by the time and we got into it, it was just too late. We had the windows down and thinking about bailing out when the fire department showed up.”

Dahnoun stood by the highway, his soaked bags nearby while he waited for another Uber driver in the hopes of still catching a flight to see his family on the east coast.

“I’m probably going to miss it,” he said of his flight to New Jersey.

In Marin County, a large rockslide tumbled onto the Muir Woods Rd, blocking access from the north to the national park. Further to the south, Highway 1 was closed because of a slide of rocks and debris near Big Sur Deetjen’s Big Sur Inn in Monterey County and Ragged Point in San Luis Obispo County.

Since the early morning hours, California Highway Patrol officers had been scrambling to respond to more than two dozen crashes as the potent weather system moved through the Bay Area.

“Doppler radar and automated rain gauges indicated heavy rain during the morning has resulted in rapid rises on area creeks,” the weather service warned. “This will cause urban and small stream flooding. Creek levels will be slow to recede through the morning.”

By 8 a.m., the weather service reported that over the last 24 hours 2.72 inches of rain had fallen on Mt. Diablo, 2.21 inches in Kentfield and nearly 3 inches of rain in the Santa Cruz Mountains.

Northbound Highway 13 was completely blocked by a large fallen tree just past Redwood Road. Drivers were turning around and exiting at the on-ramp.

Northbound Highway 13 just past Redwood Road is completely blocked by a large tree across the road. Cars are turning around and exiting at the on-ramp @sfchronicle #CAwx pic.twitter.com/7raYFiqUmq

Many Bay Area locations saw rainfall totals of an inch or more an hour as the front moved through the area around 6 a.m., leading to minor flooding and ponding on roadways.

Widespread rain continues over the region this Thursday morning. Look for ponding on roadways if driving with periods of rain to continue through at least midday. Additionally, minor urban and small stream flooding will be possible in the region’s typical problematic spots. #CAwx pic.twitter.com/vA4brAIzUF

A large boulder had tumbled onto Skyline Blvd. near Four Corners in the Santa Cruz Mountains and there was a rockslide in Orinda on Highway 24 at Fish Ranch Road Exit.

Minor roadway flooding was reported on Highway 101 at Lucky Drive, on northbound I-680 at North Main and East Hillcrest was closed between Hemlock Ave. and Aviador Ave. in San Mateo County.

Here is another look at the flooding in Moss Beach at Hwy 1 this morning. We are in for an extended period of rain, and driving conditions are expected to deteriorate. For your safety, drive with extreme caution, and stay home if possible. #CaWx @sanmateoco pic.twitter.com/QH2no0ghWH

During the stormy early morning hours, an Audi slammed into a big rig on eastbound Highway 24 at about 3 a.m., sending it hurling off the freeway. The crumbled remains of the truck fell 25 feet onto Pleasant Hill Road.

Fortunately, the big rig driver was not injured, but fuel leaked onto Pleasant Hill Road, forcing it to be shut down while it was being cleaned up. The crash remained under investigation. It was not known if it was weather related, but the roadway was wet and rain was falling at the time of the crash. 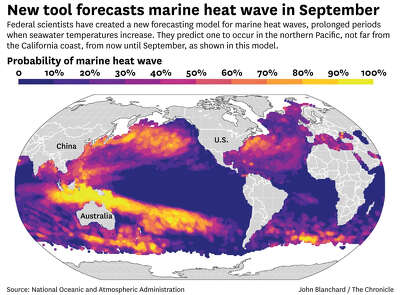